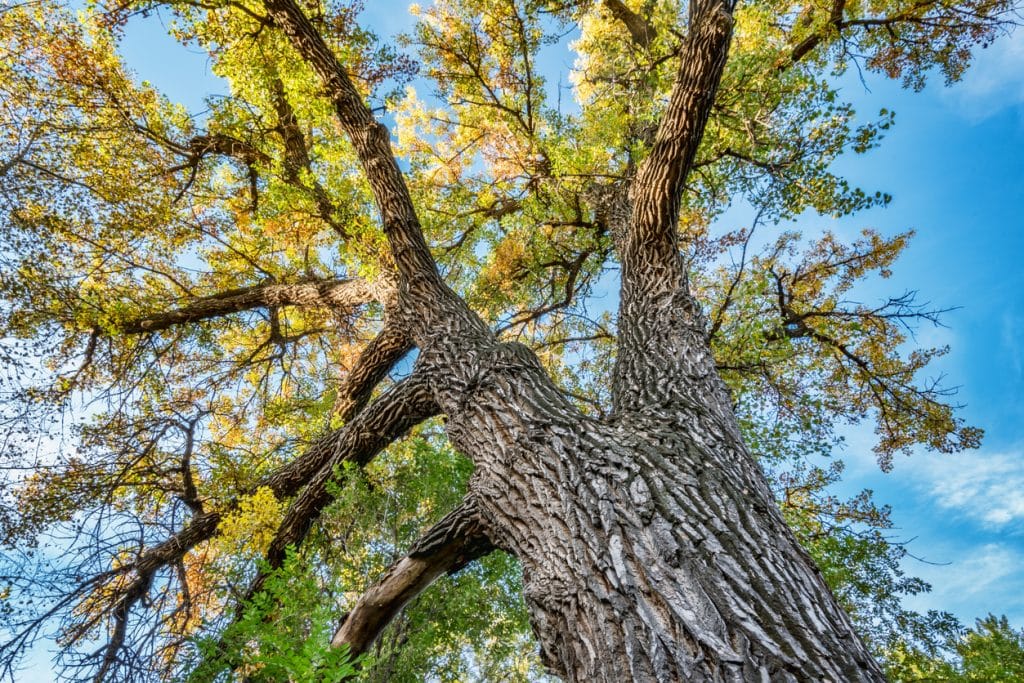 Trees Not Native to Kansas

Though Kansas’ state tree, the cottonwood, is native to the part of the continent where Kansas is now found, other trees are not. Some were brought from other places — such as Europe, China, Japan or other parts of Asia — and planted deliberately. In other cases, some voyaging seed hitched a ride and found Kansas’ soil and climate just right. Some trees that you’ll be surprised to learn aren’t native to the state include:

The commonly seen sycamore, or plane tree with its mottled bark and maple-like leaves, is actually native to western and central Europe. It is planted both in Europe and the United States, along the streets as well as in gardens and parks. It is famous for its fruits, which are famously prickly balls that grow in clusters of two to four. Sycamore trees can grow to 100 feet tall.

The graceful weeping willow, often seen in parks and gardens near ponds, streams and lakes, is native to China. It can grow to 33 feet in height and produces catkins in the middle of May. Male catkins are yellow, and female catkins are green. The long, slender leaves hang down in masses and give this tree its unmistakable look.

This beautiful tree is native to Japan and China, and as its name suggests, its bark is used to make paper. The bark is also woven into fine cloth. The paper mulberry is often found in parks and gardens, but now and then you’ll find a wild specimen. This tree can grow to about 50 feet, but it’s also found as a shrub with a round habit.

The Chinese fringe tree, which can grow to as high as 70 feet, is native to east Asia. It has beautiful, fluffy white flowers that give way to blue-black berries in the fall. Its bark, which is thick and fissured, is also attractive.

This prehistoric tree with its beautiful, fan-shaped leaves is native to China. Today, it’s found in parks all around the world in temperate climates. It can grow to 100 feet, and the male and female flowers are found on separate trees. Female ginkgo trees are seldom planted because their fruit, though edible, smells bad as it starts to decay.

Call Our Arborists for Information

If you’re surprised to find the beautiful tree in your yard is not quite native to Kansas, don’t worry. Our arborists at My Complete Tree can give you pointers to help you keep your tree healthy and growing for years. Call us today.

PrevPreviousCaring for Trees in the Summer
NextSome Tree Planting TipsNext

Contact our team today to schedule a free service estimate!

★★★★★
"I had 5 trees to trim at my home. They communicated with me throughout the whole process and cleaned up after the work was done... Brett's quote was the most reasonable. Would definitely recommend."

Yuvina Barboza
★★★★★
"Needed limbs trimmed off of the roof and from over the power line. Brett, Roy and the groundsman that came were all super nice and did an excellent job. Trees look great now. They did an outstanding job for a very fair price.

J P.
★★★★★
"...they do a very thorough job...do what they say they'll do and they did it in the timely manner. I didn't have to have them come back out and finish. Thank you so much coming out and taking care of my trees."

David Brewer
★★★★★
"We will definitely be calling them again. We have a huge yard, and it's hard to keep up. They are hard workers, and they clean up everything when they are finished. I would highly recommend these guys."

Our customers rest assured knowing that our team of licensed tree care specialists have the experience to handle their tree service needs.

Our company is full of honest and hardworking individuals who will always provide you with honest prices up front.

Every Complete Tree technician is a licensed professional who has the experience and knowledge to take care of your trees.